Whether in marketing or PR, testimonials are a popular way to give a brand a “face”. Nothing new for the communication industry as the origins of testimonial marketing date back to the 19th century. Back in the days, the poet Oscar Wilde was one of the first "influencers" or "testimonials" of his time. During his US tour in 1882, the companies, with whom he was in contact with on his journey, used his photograph and advertised their goods as those which Oscar Wilde also consumed in order to transfer a little of his fame onto themselves. At that time, people were not yet familiar with the concept of copyrights, so the images seemed to be free to use.

However, 150 years later, things are a little bit different. Both, testimonials and clients are bound by contracts that protect both parties and specify the exact use of any image or name.

One thing, nevertheless, has not changed and remains the main reason why brands decide to work with testimonials: A familiar face in an advert creates intimacy, authenticity and adds some glamour. Who doesn't want to drink the same coffee as George Clooney?

If a brand choses the testimonial carefully and invests in a long-lasting partnership, the ambassador and the brand merge into a single entity. The match-up hypothesis states that a person advertising a product is particularly effective if the characteristics of the testimonial match those of the brand. A mutual association takes place, which has a positive influence on the brand and the personality and can thus attain cult status.

But how exactly do you find the right ambassador for your customer and what should one absolutely pay attention to when choosing a testimonial, so that the brand values are reflected and the campaign does not miss its effect?

In fact, it depends very much on the specific brand identity. Currently successful brands such as Apple or Tesla get along without any testimonials. This is partly due to their inevitable association with their founders Steve Jobs or Elon Musk. The charismatic creators turned themselves into true testimonials – therefore, suddenly using a soccer star as an ambassador would not seem very authentic.

But what about brands that have not yet developed their own identity? With the help of an ambassador, they can emotionally charge their product and start attracting interest. Further, this marketing tool can also be used by well-established brands that want to reposition themselves or expand their customer experience. It has been proven that people tend to remember a product or a brand when they connect to it or find themselves in it, a so-called self-congruence. For the company this means an increase in the valuation of advertising material and in willingness of the target group to buy.

However, one is also confronted with difficulties when it comes to the choice of testimonials. The main question is with how many companies ambassadors can work until they lose their effect? When do they become a “no-go” and do too many different mandates affect their general authenticity?

It becomes increasingly difficult when testimonials decide to stand for anything that is offered to them, meaning they represent anything from shoe polish and jam to the latest car model. Credibility and identification with the advertised products start to fade and hence do not achieve the desired effect. Worst comes to worst, a badly chosen cooperation triggers a “shit storm”, because the named testimonial advertises a product, which in no way corresponds to his or her portrayed lifestyle or principles. A scandal, which may severely harm the brands reputation.

A residual risk always remains, of course, since there are always certain factors that even the testimonials themselves cannot control, since they are only people and people make mistakes. Hence the saying, a testimonial can cost a company millions, a misstep billions.

Testimonial vs. influencer
Influencers and testimonials are often mentioned in one go, so where is the difference? While influencers find their origin in the social media world and inspire and influence their own fan base on the social web through self-created content, a testimonial is not necessarily active on social media. Customers, employees, the CEO or even an influencer can appear as a testimonial of a brand. In contrast to influencers, however, the messages are created by the company and put in his or her mouth. The benefit of a testimonial lies more in giving the brand a face than in sharing content on a social network.

For our new campaign for Rigert AG Treppenlift, we deliberately chose the world champion in wheelchair, Heinz Frei, as their testimonial. The fact that he cares about the topic of accessibility, since he himself is forced to deal with it in his everyday life was a major factor in choosing him as an ambassador for Rigert. Heinz Frei represents the target group and knows about the challenges of life in a wheelchair. Rigert customers find themselves in him and therefore feel his motivation through the campaign. By cooperating with a testimonial, the stair lift pioneer wants to step out of the shadows, clean up the dusty image of stair lifts and put the topic in the centre of everyday life. 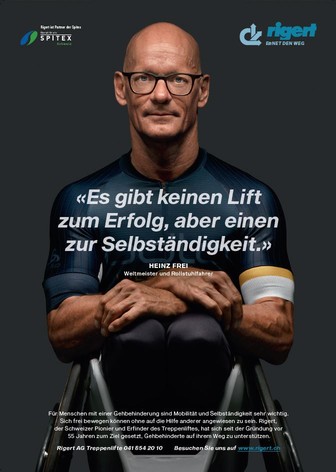