The ice hockey rankings with a difference

With its Social Hockey Score (SHS), PRfact is now measuring the relevance of Swiss ice hockey clubs on the social web.

One thing in particular is occupying ice hockey fans at the moment, with the playoffs and playouts in full swing. All of the clubs cultivate their communities on social media. We found ourselves wondering: does a club’s size or position in the standings also guarantee success on the social web? PRfact spent the regular season scrutinising the social media presence of the clubs in the Swiss National League.

One thing is clear: as a basic principle, a club’s sporting success or failure in the run-up to the playoffs and playouts is reflected in its social web performance. There were a few surprises, however, such as the ZSC Lions: despite being Europe’s biggest ice hockey club, the team from Zurich are struggling to get their sizeable fan base onto the social channels in a way that would make it count. This is in stark contrast to HC Ambri Piotta, tipped as relegation candidates in pre-season, who not only dominated Ticino on the ice but also came out of the analysis with the highest score and the title of social media champions.

Overall, the content on the social media channels of all National League clubs varies only marginally from one to another, with match highlights and player interviews the dominant features. Only in isolated cases does a club deploy formats of its own – and these are evidently poorly received by its community of fans in any case. Clubs generally post identical content on both Facebook and Instagram. “It’s a shame, because it means a lot of potential on social media is going untapped,” believes Dino Ceccato, Director Digital at PRfact.

We have established that the smaller clubs have more loyal and more impassioned fans than their larger counterparts. One striking observation is that most of the spots at the bottom of the rankings – aside from HC Lausanne in fourth – are taken by clubs in French-speaking Switzerland. Fribourg-Gottéron and Genève-Servette scored particularly poorly, eliciting little feedback from their community and attracting hardly any new fans. Clubs are generating much more growth and engagement on Instagram, very much the platform of the moment, than on Facebook– regardless of how big their community is. “This mirrors the general trend on the social web,” Dino Ceccato confirms.

The methodology: what is the SHS?

The analysis is based on the whole of the regular 2018/19 season.
How have we calculated the score? We began by analysing and evaluating the clubs’ individual social media profiles (Facebook and Instagram), looking at how many fans or followers they had. We then determined how well the club generates growth within its community. We also assessed feedback from fans and calculated an interaction rate for each account. These three indicators were then combined into a single score, the Social Hockey Score (SHS), to enable clubs to be compared with one another. 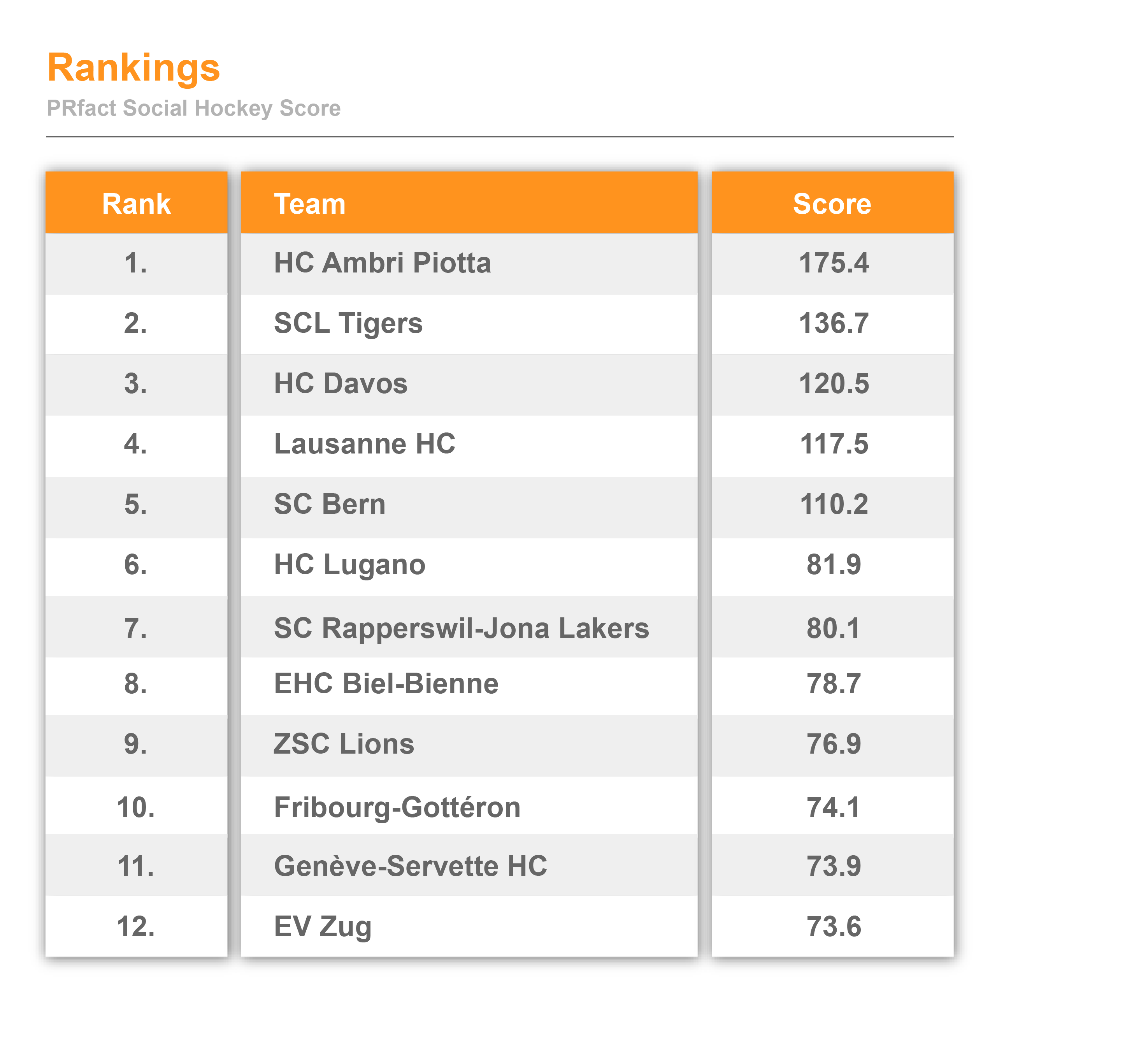 Ambri put in a winning performance across the board during the regular season leading up to the playoffs, with good scores (community growth and engagement rate) on Facebook and Instagram. Evidently, the size of a club’s community is not necessarily a success factor. The same is true of SCL Tigers in second, whose impressive performance is underpinned by a very good engagement rate (Facebook and Instagram).

Although third-placed HC Davos has built up a considerable Facebook following over the past few years, it proved unable to grow its community significantly during the period being analysed. Instagram tells a completely different story, however, with the team from Davos jumping straight to second place in its debut season on the platform. Not long after the club launched its Instagram profile, it attracted more than 7,500 new fans during the regular season. 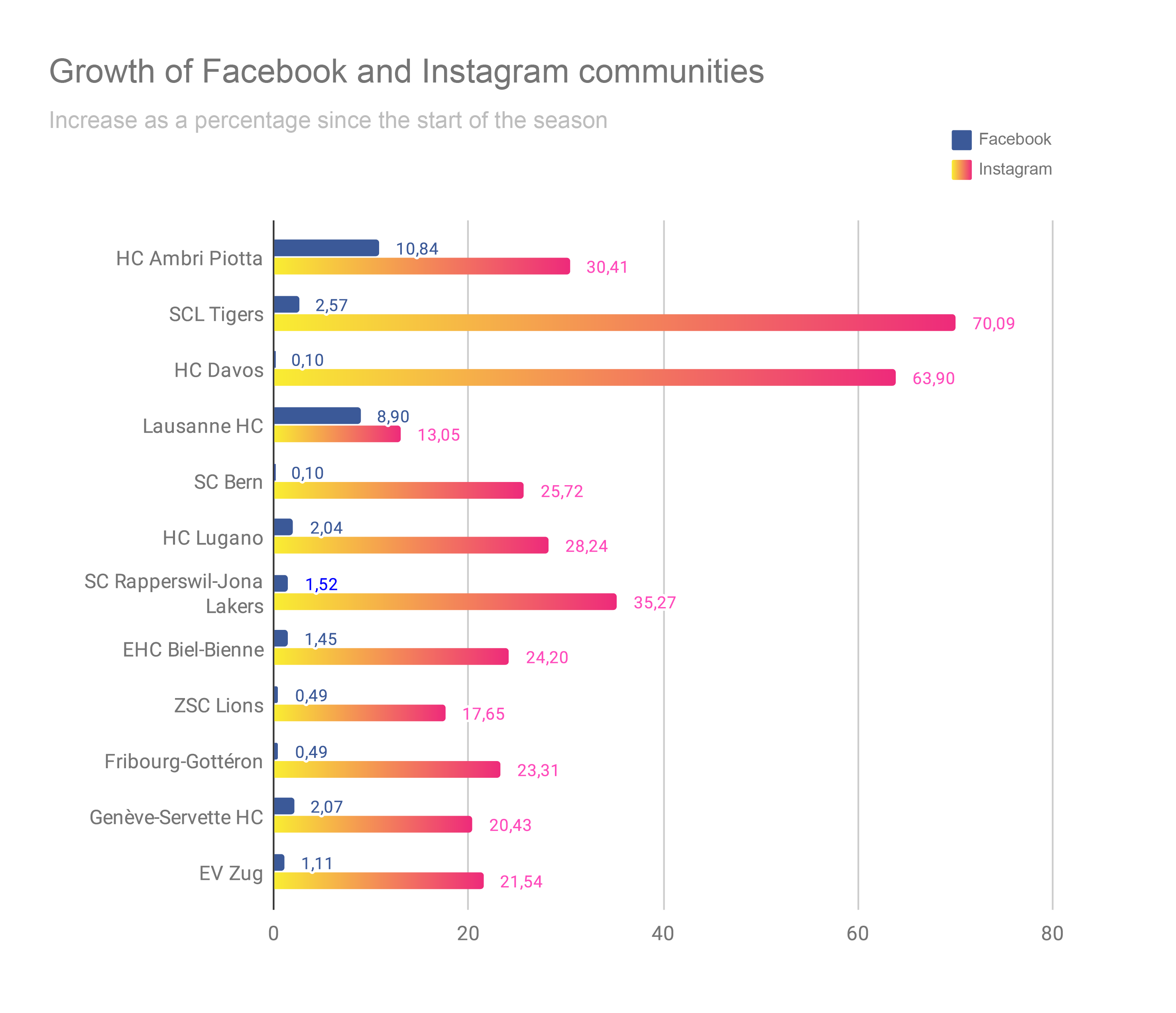 We were very surprised that only one club from French-speaking Switzerland, HC Lausanne, came out near the top. A healthily average performance – no great scores but no disastrous ones either – secured them fourth spot, even ahead of the mighty SC Bern. Although the team from the Swiss capital boast their own self-designed formats produced to a high level of quality, fans tend not to interact much with their content.

The Instagram data was collected with the kind support of Likometer.