The Swiss national team in social media: Xhaka comes out on top

The Swiss national team has successfully qualified for the knock-out round. Time to analyse the performance of the Swiss players in social media. Who attracts attention both in the social media and on the pitch? A high number of followers alone does not indicate a social megastar.

If you look at the fan numbers of our footballers, Xherdan Shaqiri is the clear winner with a total of 2.9 million Facebook and Instagram fans. However, it is someone else who has the best social soccer score: With 2.5 million fans, Granit Xhaka is more successful than his team mate. But how is this success measured?
Various factors play a role here: the combination of the number of fans, posts and reactions of the followers provide information about the activity of the player and his community and provide the so-called engagement rate. If the content that Xhaka posts is boring, too promotional or even irrelevant, it may be noted but is not covered by engagement passes. But if post of his matches the interest of his community precisely, he is rewarded with many comments, shares and likes. Therefore, if the player has a close relationship with his fans and offers relevant content, they stay close to him and elevate their star to the top of the engagement rate. 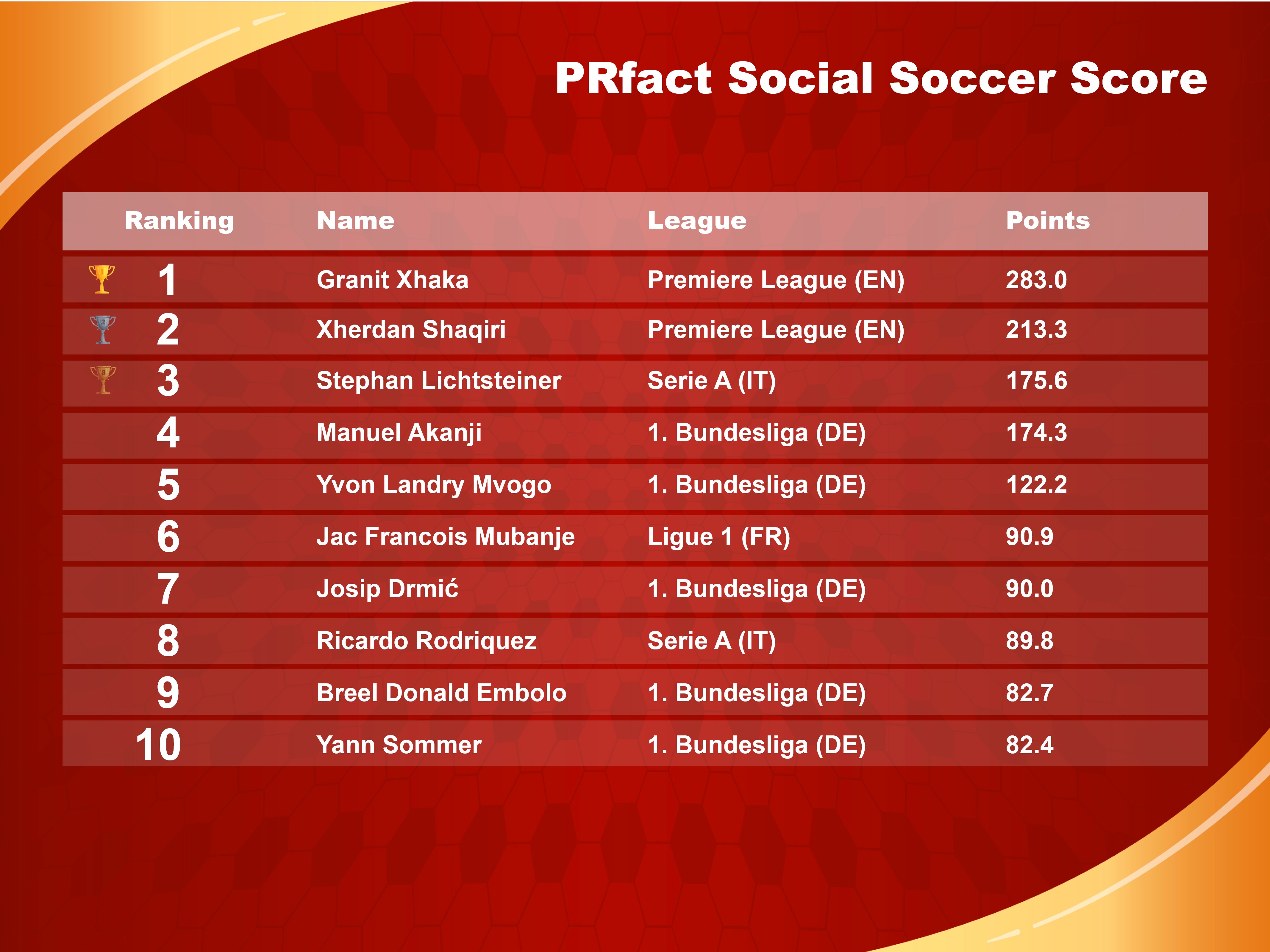 A good example of this are Akanji and Mvogo, who rank 4th and 5th in our Social Soccer Score list. Although they have by far the smallest number of fans on Facebook, their content appeals to their fan base and gives them more commitment than their colleagues in relation to their number of fans.

The playmakers on the social web

In addition to the engagement rate, the focus is also on other important indicators, i.e. when it comes to influencing one's fans and strengthening one's own private brand. Leader Xhaka convinces across the board. A large number of followers and an active management of the channels with content that is well received by the community. We assume the 14% of his community from Indonesia to be supporters of FC Arsenal. English football clubs are traditionally very popular in Asian countries. 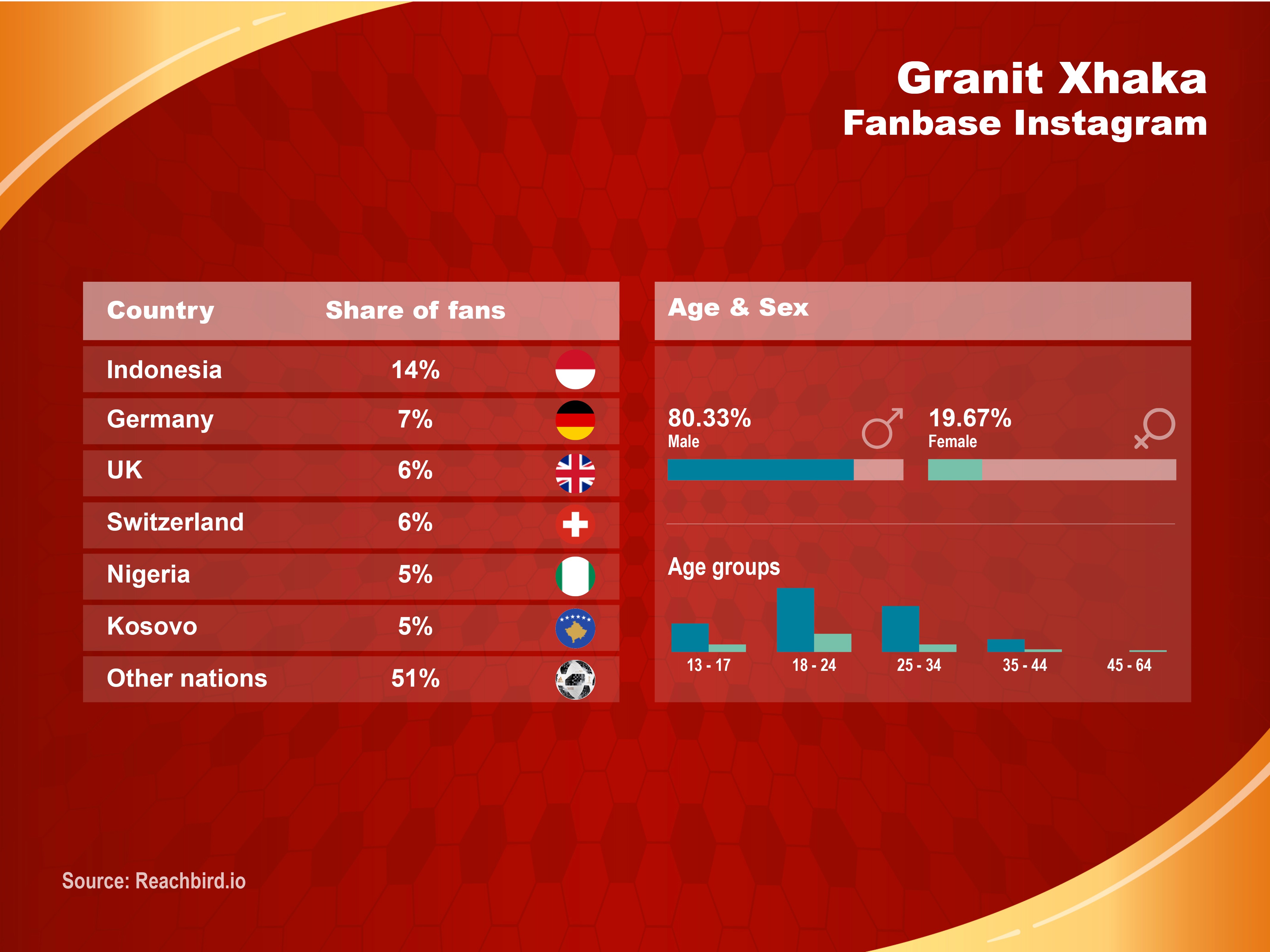 In Xerdan Shaqiri's case, for example, it is astonishing that after a year in the Premier League he has "only" managed to build up 100k fans in the UK - compared to his previous three stints in Italy, Germany and Switzerland, this is rather low for a social web-savvy league. As a result, the value of his private brand should remain stable, especially in these countries, or increase the longer the World Cup lasts for the Swiss national team. 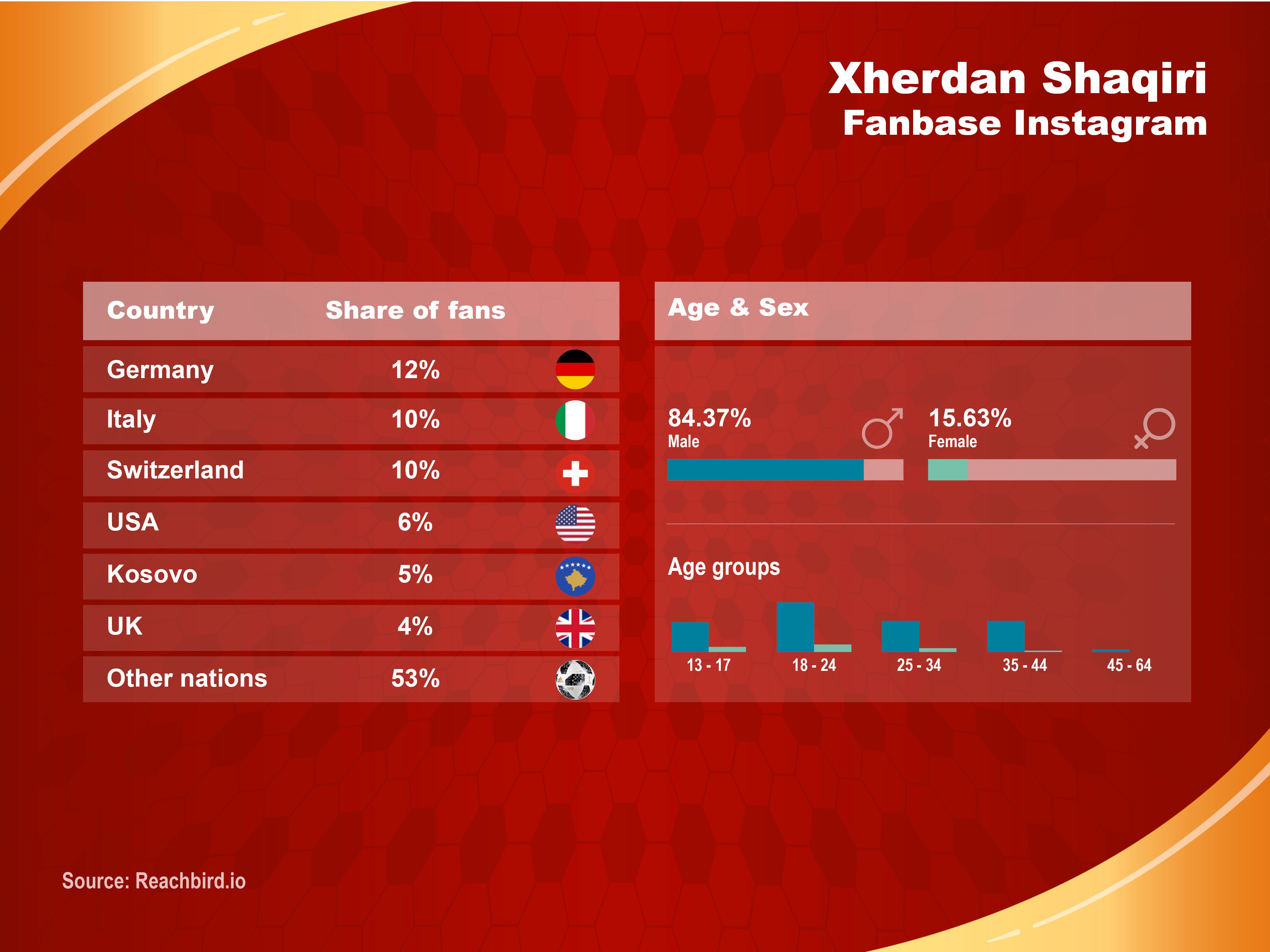 For Stephan Lichtsteiner, on the other hand, his private brand in Italy is very dominant. After seven years at Juventus Turin, 65% of his community comes from the southern neighbour. Meanwhile, only 2% from CH follow him. It will be interesting to see how he manages to inspire people from the UK on the social web with his new employer FC Arsenal.

If you look at the relevance of footballers in terms of the age of social media users, it soon becomes clear that the young target group, in particular, is following very actively. This trend can generally be observed for all national team players.

There also seems to be a generational gap in the choice of social networks. The younger half of our football national team no longer has an official page on Facebook. However, all of them are on Instagram without exception.

After the Social Athlete Score of Swiss Olympic athletes, PRfact is publishing the social score of Swiss athletes for the second time. PRfact recently analysed the social soccer core of the Swiss national football team. How is the social soccer score calculated? First, the individual social media profiles (Facebook and Instagram) of the footballers were analysed and evaluated, taking into account the number of fans and followers. PRfact evaluated how active the players are on their profile and how often they published contributions over the past three months until the start of the World Cup. In addition, the activity of the fans was evaluated and an interaction rate calculated for each account. For comparison purposes, these three key figures have been combined to form a separate score, the social soccer score (SSS).